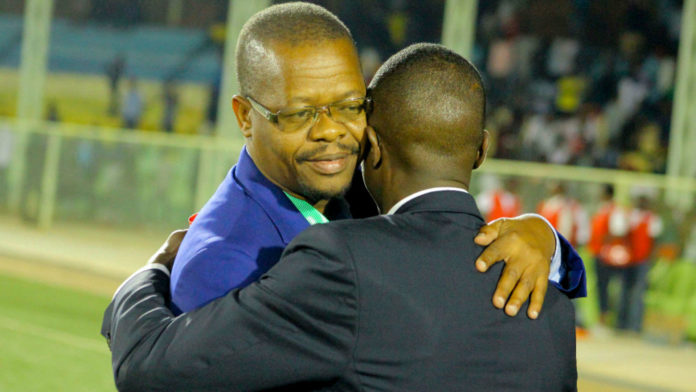 Magogo who revealed to the press at the 95th FUFA Ordinary Assembly that was held at the Multi-Purpose Hall in Adjumani, West Nile on Saturday 28th August also confirmed that his works will only commence after the investigations.

“At the beginning of this Assembly, I told you that I have good news to tell you. The good news is that there is a case that was filed to FIFA to tarnish the person of the president. This case can go on for ages but to dispose of it once and for all, I was advised to step aside for two months as the investigations go on,’’ Magogo said before adding that the federation first vice president, Justus Mugisha will temporarily take over as the investigations are conducted.

“I was very sure that the truth will be known and I will be able to bounce back,” Magogo added implying that the case against him was false.

Earlier, Makindye West Member of Parliament and also Shadow Minister for Sports in Parliament, Hon Allan Ssewanyana raised cases to FIFA against Magogo indicating that the latter sold and traded the 2014 World Cup tickets that were designated for Ugandans, by FIFA for the 2014 World Cup.

In the petition, Ssewanyana who is also the chairman of Katwe United Football Club, an entity in the FUFA Big League indicated that this was in violation and breach of the FIFA statutes, FIFA Code of Ethics and FIFA Disciplinary Code.

Ssewanyana’s petition was filed on 30th May 2017 to the FIFA Ethics and Integrity Committee, accusing the person of Magogo for violation and breach of the FIFA statutes, code of ethics and disciplinary code, under the articles 13, 18, 19, 20, 21 and 22.

For every FIFA World Cup tournament, a particular number of tickets is allocated to each federation before the championship.

In Uganda’s case 177 tickets were allocated but none, according to Ssewanyana were sold to Ugandans.

“I sent the petition on May 30 with all material evidence both oral and documentary that clearly implicates Magogo as having acted in breach of the FIFA statutes, disciplinary code and articles 13, 18, 19, 20, 21 and 22 of the FIFA code of ethics and as a result of the said actions has dented the image of Ugandan football due to the illegal, immoral and unethical practices and conduct which is the basis of the petition,” Ssewanyana’s statement read.