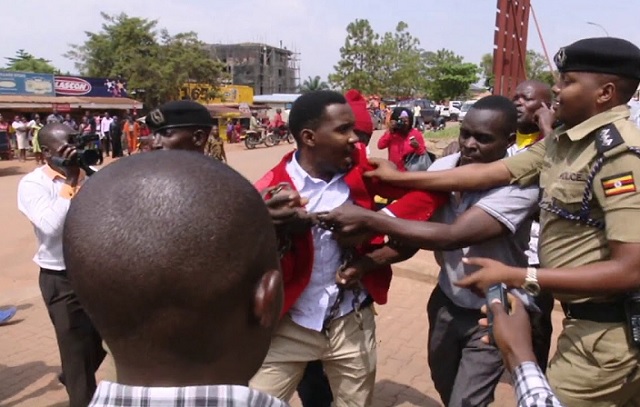 The Makindye West legislator Allan Ssewanyana Was arrested and detained at Katwe Police Station over a demonstration against a sewage disposal at Mulago Referral hospital Kiruddu.

The legislator and his supporters attempted to close the hospital over reckless out flow of sewage into the community. But Police blocked his intentions.

Ssewanyana dressed in red jacket was stopped, immediately he started mobilising residents into protest. Which wasn’t easy as police wrangled with resident in trying to block the legislator from fulfilling his plan.

“And if I fail, I will just close up the hospital. They passed UShs3.5b to reconstruct the hospital sewage line to allow people living in the hospital neighbourhood live comfortable lives. But up to now people are still living in this sting environment. They are going to die” Ssewanyana speaking to journalists.

Security blocked him right at the gate arrested, him and was taken to Katwe Police Station. While on the tarmac the MP was dragged into the awaiting van amidst opposition which disorganised traffic flow along Salama road.

An incident that disturbed residents, saying that the hospital management were letting sewage flow up to their houses, and at the same time block their MP from addressing their issues.

“They can’t even renovate the hospital; it smells to us causing discomfort. Why don’t they allow him speak to his people? For us we want him speak to us, why are you blocking him does he represent pigs?” Residents of the surrounding area speaking.

Dr Diana Atwine, the permanent secretary Ministry of health didn’t respond to the incident despite various attempts made.

In 2018, Atwine confirmed plans to renovate the hospital sewage system, but until today no step has been taken.

And Dr Charles Kabugo, the hospital director, refused to air out his view on the matter saying he was in a meeting.