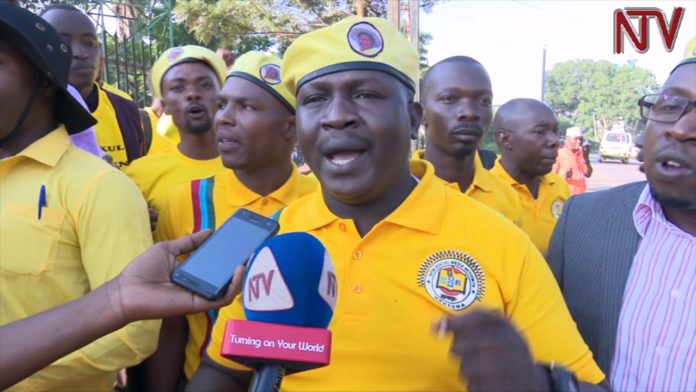 A group of youth belonging to National Resistance Movement (NRM) stormed Kamwokya street demonstration against UK involvement in Uganda’s issues. They say the decision taken by UK Legislators to discuss matters of democracy in Uganda is wrong.

Dressed in a regime symbolic yellow shirts with written materials on placards stating that; “back off dr. William you are not a Ugandan.” Tried to push their way towards the British Embassy protesting over what they termed as trespassing into Uganda’s political affairs by the British government.

These youths said that they want UK MPs end their discussion on Uganda’s democracy and focus on their internal affairs such as the Brexit and respect Uganda’s sovereignty.

“As a sovereign state we can live our country. We have authority over our country and matters of the state can be discussed with in the sutures of the country. Secondly, Uganda is a member of EAU and AU and if anyone wants to discuss any issue or advise Uganda he can go through those member states which have the authority to advise other member states.”

“Why are you interested in bringing wars into Uganda? We are aware of your interests in Uganda, you want people who are not well versed with governance of the country so that you can manipulate their ideas and use them for your own interests we are tired of being your subordinates. We can govern ourselves because our president is focussed,” angry and determined NRM youth expressing their views about British involvement in Uganda’s politics.

However, as they walked towards British High Commission Offices in Kamyokya a Kampala suburb they started tossing stones which attracted security attention. Police calmed down the situation which was already interrupting traffic flow around Kamwokya and arrested 3 people in the process.

According to police through their spokesperson Kampala Metropolitan Luke Owesigire said the arrested three persons are under police detention at Kira road Police station under charges of inciting violence.

“We are yet to take statements from them to know what they were exactly doing but we shall hold them until they tell us what the matter is.”

Earlier on, on Tuesday evening Harriett Baldwin the UK State Minister for Africa observed that loyalty to democracy, democratic processes such as rule of law and firm institutions are first on their development agenda for Uganda. She continued to say they will as well continue engaging their state on the issue.

Nevertheless, Mr. Okello Oryem Minister for international cooperation said that; after 30yrs of peace and stability, the plan to disorganise it is rewinding. He stated this in response to Harriet Baldwin, Williams and other UK MPs earlier statements during their discussion on Uganda’s democracy and also vowed not to apologise to the UK government.

“It is funny at this particular moment when chaos and turmoil engulf the Democratic Republic of Congo, commotion in South Sudan, a coup attempt in Gabon and Bashir struggling in Sudan, then Williams chooses Uganda.”