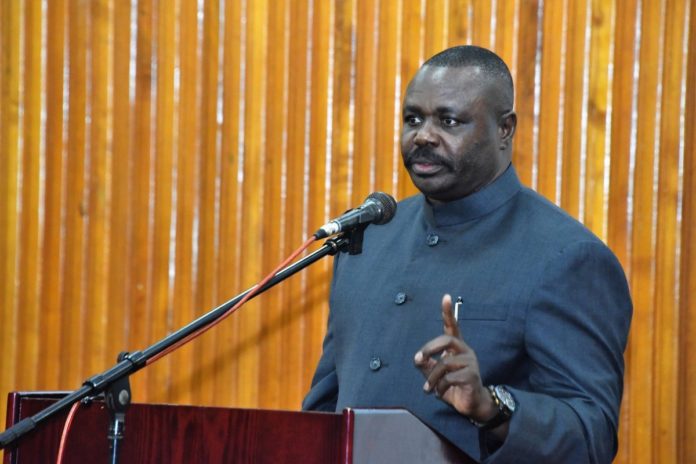 Deputy Speaker of parliament, Jacob Oulanyah, said parliament will not intervene in the issues happening between police and the Kyadondo East Legislator stage name Bobi Wine.

Although he earlier asked the Internal Affairs Minister, Gen. Jeje Odongo to make a statement on the continued arrest of Bobi Wine turned politician and cancellation of his arranged music shows.

Oulanyah says the medicine to Bobi Wine’s problems is between him and the police.

“You will not have the protection of parliament and there are procedures for deal with those things, so let us be honourable in the way we do things,” Oulanyah said.

He proceeded to say that Hon Kyagulanyi is having difficult time with police, simply because he’s involved in illegal activities attracting police’s attention.

Oulanyah however, warned law makers who wish to involve themselves in illegal activities and then expect parliament to defend them.

Oulanyah’s message was a response to Mukono Municipality MP, Betty Nambooze and Muwanga Kivumbi MP Butambala County (DP), who on the floor of parliament raised a matter of National importance regarding continued police brutality against opposition players, particularly Bobi Wine.

In their petition, they want Deputy Speaker to invoke parliament provisions on privileges MPs enjoy to save Hon Kyagulanyi, who’s now under arrest at his house in Magere.

“Mr Speaker sir, you are supposed to assist us to be able to do work in parliament but as we sit here, the people of Kyadondo East can’t be represented because their MP has been detained in his home together with his children,” Nambooze said.

About five talk shows involving Dr Besigye have been distracted by security, him being dragged out of the station studios.

And as to Bobi Wine at least 124 music shows suffered cancellation just hours to start under false claims of him not following the stated guidelines specifically the Public Management Order Act provisions.

“The fact that an MP cannot leave his home to come to parliament, I beg that government comes out clearly whether it is an offence to dress in red and sing slogan of people power,” Hon Nambooze stated.

He however, vowed to handle any matter forwarded to him respectively. But he said he will look into Bobi Wine’s issues and may be have him freed.