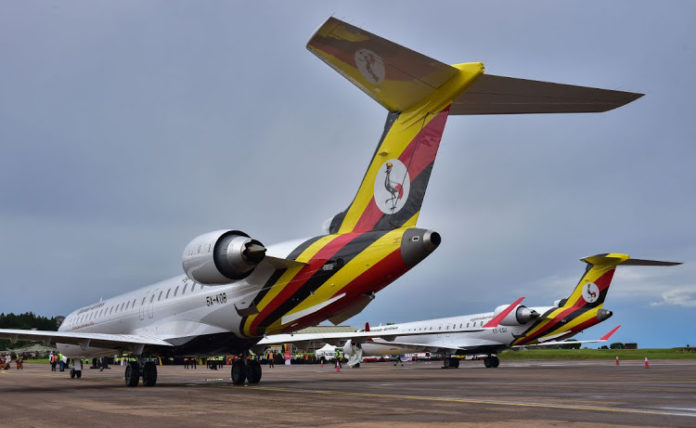 It was a moment of excitement as president Yoweri Kaguta Museveni, signs in the two Bombardiers CRJ900 planes that touched the Tarmac, at the VIP Wing at Entebbe International Airport.

Marking revival of the Uganda Airlines, that was previously run down and eventually closed in 2001.

President Museveni says the revived Uganda Airline will not be allowed to fall again.

Addressing the gathering at the function, that marked the reception of the two CRJ900 Bombardier planes on Tuesday, Museveni says although the first airline made a lot of mistakes that contributed to its downfall, they will not allow the revived Uganda airline fall again.

“While mingling millet, you must wait for the right temperature of the water to put the flour. You don’t do it too early or neither do it late,” Museveni stated.

Museveni in his message referred Uganda Airlines to a human being, saying that humans die after getting old and when the body could not function any more.

So, according to president, the old national carrier failed because it couldn’t keep it’s “body” without burying it all that long. And they buried the old airline, they are now welcoming a new one.

“I was among those who buried the old airline and I am among the midwives delivering the new baby. This new baby will never die.”

Museveni continued to say that Ugandans in the diaspora alongside tourists and business men and women are the first passengers expected use the new Uganda airlines.

He adds that many Ugandans abroad especially Canada, North America, UK and other European Countries use other airlines whenever they return to the country. According to Museveni they can use the Uganda airlines to also contribute to the National Development.

“During Amin’s time, many Ugandans ran away and are now well established wherever they are. Many others are in diaspora but now they can return home using the National Carrier,” Museveni observed.

On the side of business, Museveni argued business people to use the Uganda Airlines, whenever, they wish to make business trips.

“They can now use the National carrier to fly to Dubai, Nairobi and China for business.”

Relatedly, he said tourists also have a chance to contribute to the country’s development and flying direct to Uganda by Uganda airlines.

“The number of tourists coming to Uganda has been increasing over time despite several stopovers in Dubai, Addis Ababa, Nairobi and Kigali. Then what will happen if they can fly directly to Uganda?”

This will as well cut on the countries expenditure on foreign exchange, according to Museveni.

Museveni however, commended the August House for passing the shs280 billion to purchase the two Bombardier CRJ900 passenger planes.

The chairperson Board of Directors for Uganda Airlines, Capt. Gad Gasatura said that the past mistakes that Uganda airlines and several companies made, became a collection of experiences called lesions and they will never repeat the same.

“We are aware of the cut throat competition and we are aware that in an economy where Greenland and Teefe banks failed, other banks like Stanbic have also flourished,” Gasatura said.

Gasatura added that; “we are not intimidated about the failures of other airlines because we are here to stay.