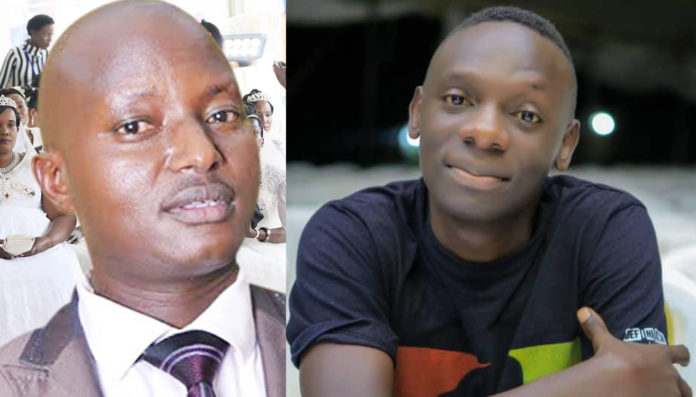 Pastor Wilson Bugembe of Light the World Church Nansana also a gospel singer, has joined the list of Pastors who have come out to speak on the ongoing fights between Pastor Bugingo and the wife Teddy Bugingo.

In Bugembe’s message, he asked the House of Prayer (Canaan Land) Pastor, Aloysiuos Bugingo whom he referred to as his ‘senior’ to con his wife and children afresh. In his piece of advice to Bugingo he says he should stop publicising his family issues, go home sit with both wife and children and reconcile with them again privately.

“From what I have seen his wife and daughter say, he really lost their affection and love, they seem to feel very betrayed, and the onus is I think on him as the man to lead the way in sorting his family. We weren’t there when him and his wife were ‘conning’ each other, so he should handle it first between himself and his wife, then bring the children into the picture.”

“If the wife wronged him in any grave way, then Pr. Bugingo should follow the example of Christ and forgive her. That will in fact show the world that he is really Born-again and forgives, and it will even show that as Balokole we forgive, that act will preach the gospel. Otherwise, God hates divorce. Even Jesus was mistreated but he forgave his tormentors.”

In Bugembe’s first statement he said that Pr. Bugingo’s estranged marriage woes has “really embarrassed us as Balokole (Pentecostals).”

He also said that some ‘Pentecostals’ out there are celebrating Pastor Bugingo’s troubles because of the wars he opened up against some of the pastors and the self-made attitude he had, ‘castigating and reviling’ them.

However, Bugembe said Pr. Bugingo is a good person according to the interplay they both shared. The only thing he should do is try control his tongue.