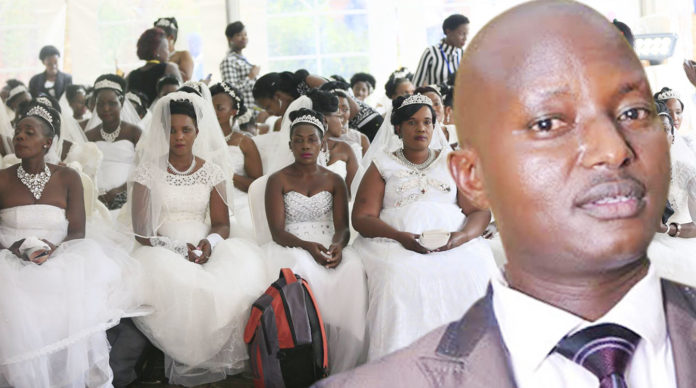 House of Prayer Ministries International (HPMI) leader, Pastor Aloysius Bugingo, has terminated his Sunday apology to both his family and the public when he vowed not to speak again but rather keep quite on issues regarding his marital life as a sign of respect to his family.

On Tuesday 7 May 2019 Pr. Bugingo said that unknown gun men attacked him on Sunday 5 May but God is good he kept him safe.

Ms Teddy Bugingo, Pastor Bugingo’s wife who have taken long minus attending church services at HPMI surfaced on Sunday, amidst huge escort whom Bugingo claims came along with guns targeting his life.

Appearing on Salt Media FM on Tuesday evening, Bugingo said that there was suspicion at church grounds confirmed by his intelligence personals, but God was in control and nothing happened.

Bugingo says Teddy’s support team sent her to the church that day with a hidden agenda of firing bullets to create a tense situation at church, and as a result this will call for a temporary closure of HPMI.

“This plan failed because by the time they reached at church, I was not on the pulpit. Security operatives and intelligence had already known about the plan of shooting at me that is why I kept in my car in the parking lot for a long time,” Bugingo said.

On Sunday he openly apologised to the nation and his family for the damages caused to them following his marriage woes.

“I apologize to the men and women who are tuning in and those who are here, who suffered through last week having to hear my name over and over.”

He continued to state that; “For the sake of my born and unborn children, I have children some of them unknown to you, and I am still producing more. And to all those children, I will not do or say anything that will hurt them in future. I want to assure you that if I was able to be silent for all those years, from today, I will not say another word that will hurt the future of my own children, my future in-laws, and my grandchildren.”

Last month Pr. Bugingo’s marriage woes shocked the nation when he opened it up before the church congregation on a Sunday service that his Wife Teddy Naluswa and Daughter Doreen Bugingo are trying to steal and sell the church land.

But Ms Teddy Bugingo in return refuted the allegations stating that his husband has another woman to replace her and now he’s attempting to wreck their 29-year-old marriage to marry his new woman.

Naluswa further said that his Husband (Pr. Bugingo) vowed to damage her reputation if she fails to grant him divorce.

According to reports on the media, Pr. Bugingo is constructing a multi-million house for his new wife who happens to be his staff at Salt Media as well.