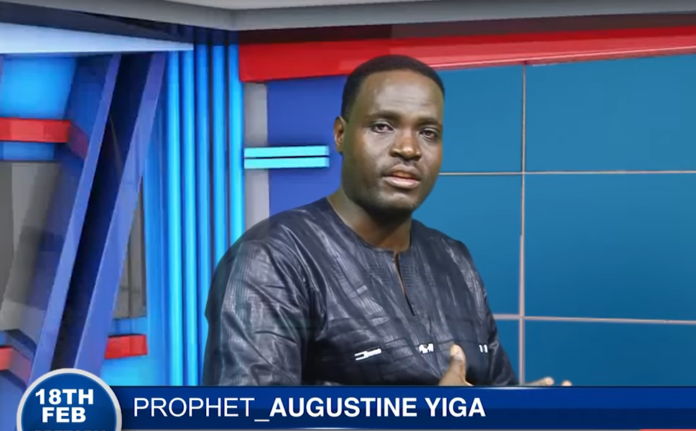 Pastor Augustine Yiga of Revival Church Kawaala, asked his followers to build him a mansion of his own this year. Yiga says it’s time now for him to get his own house, because for the 15 years he has preached the gospel, he sacrificed all the money towards church construction.

He told the church congregation that he has no home and he is tired of staying in one of the church rooms.

“I sleep in one of the rooms in church.”

“I have sacrificed my whole life and money building the church. Now it’s time for you to return the favour. Build me a house like that of Bugingo’s second wife.”

Yiga say followers should construct his house in a broad day light not in hiding and get to know everything in the news.

“I don’t want newspapers to be the first to reveal my house. Take the honour and build your prophet a house. I am tired of living in the church,” Yiga stated amidst cheerful congregation.

Pastor Yiga continued to state that he is tired of renting.

“Do you want me to use church money to build a house in secret? If not, you should help me build a house of my own so that I stop renting like other people. I am your pastor and I have been doing this for 15 years but now I need your help also,” pastor Yiga’s petition before his followers.

Additionally, Yiga said he is not like other pastors who consider their aspirations first before that of the God.

According to Yiga he considered setting up a ‘house of the Lord’ first, reason being he did not want his followers to grow suspicious if at all he had constructed a mansion before the church.

Yiga also said he has no doubt now, because his followers now know him as an honest person who utilise church money appropriately.

“As per our plan, at the time of completion, Revival Church is going to be the biggest church in Uganda,” Yiga noted.