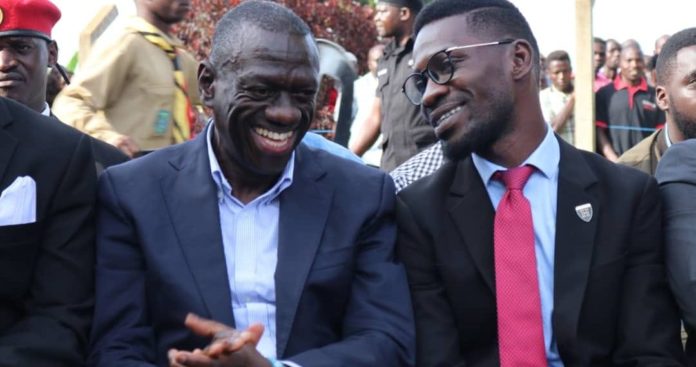 Forum for Democratic Change Party (FDC) and the People Power pressure group declared their planned agenda to work as a team, earlier yesterday in a media briefing. But the two group leaders including Dr Kizza Besigye of People’s Government and Bobi Wine of People Power were absent at the conference.

“As you might be aware. for some time now, the two principals have been holding talks to answer the demands and request by various people in Uganda who want to see a close working relationship between them as people and political organisation,” said Nambooze.

The two leader’s absence in the meeting left people wondering that may be they don’t like the union, and it could have been pushed by the other members in both teams.

And also the loud silence from Dr Besigye. He has not yet publically pronounced his stand regarding this union. It’s only the People Power leader Bobi Wine who had publically voiced it out.

After Besigye’s visit to Bobi Wine, that occurred last week, Bobi Wine’s social media platforms had it that the two teams talked “about where the people’s struggle for liberation stands, and what we must do together to complete the task ahead.”

“What we all agree about is that Museveni’s regime of blood and national shame has never been as vulnerable, weak and utterly exposed as it is today. We only need to mobilise our people for the final push and victory will be guaranteed.

Also after the media conference held by the two teams, Bobi Wine rushed to his social media platforms and announced their unity.

And still Dr Besigye has not yet responded either in acceptance or denial.

Besigye and Bobi Wine have been fighting each other for quite long.

For instance, Bobi Wine accused Besigye early last month while at Hotel Africana over his claims that Uganda has no democracy yet he has been on the presidential ballot paper four times.

“Of late I have come to conclude that some members in the opposition are only concerned about their positions and will fight any composition that threatens their positions. For a leader to say a ballot can never oust Museveni without offering another option is disappointing.”

“Those who think they use National IDs to remove Museveni don’t understand the man,” Besigye noted.