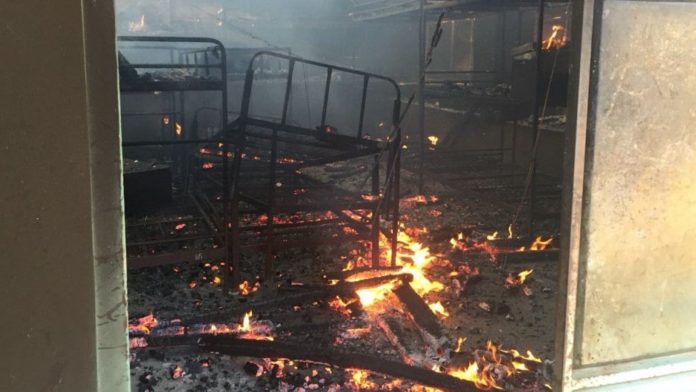 In a fire that gutted St Benard S.S Manya killing students and leaving many injured, police has come out and blame the school administration for not enforcing security recommendations issued and standard rules for schools.

Police says according to their investigations dormitory rooms were congested and littered with destroyed beds and other things used by students.

Police also insisted that congestion in rooms is prohibited and its punishable since it is violation of rules and regulations established by the ministry.

However reports contradict with Police allegations indicating that it may have been started by one of the S.4 students who was expelled from school for misconduct in the process of the O level final National examinations.

At the moment 8 suspects containing students and teachers have been arrested to help in the investigation.

Masaka Police commander Latif Zaake says that investigations in this case are being handled and followed closely. He adds that when you are investigating you owe to be open minded not to be stuck to only one lead because you may actually get stark to people when actually the culprits are external and not from within. Zaake added that the investigation is upon all necessary clues they have, to get whoever aided to destroy this school.

In the same case a student St Benald S.S Manya, a witness and a survivor says that someone threw a bottle into the boys’ dormitory through the window and suddenly fire broke out.

In greater Masaka, this incident is happening the third time in the year 2018. Between March and June fire gutted Green Hill P/S in Bukomansimbi and Bishop Dungu P/S in Lwengo District. However, the most terrifying fire in the country which happened years back was the Buddo Junior School which claimed 18 children lives and 2 adults on 14/04/2008.