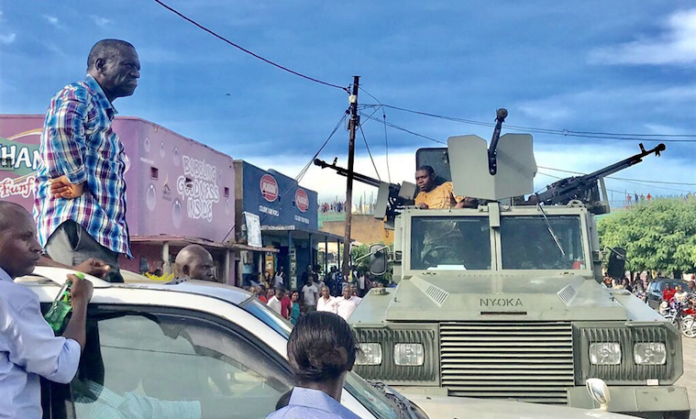 The opposition strongman, former Forum for Democratic Change (FDC) president, Rtd Col Dr Kizza Besigye and the FDC Party President, Patrick Oboi Amuriat were on Monday 29 of April blocked by police from holding a meeting with their fans in Kasese Municipality in Kasese District.

The two were surrounded by both Uganda Police Force and the Army on their way to the meeting.

But this drive has been blocked by police several times. This includes the meeting arranged in Mbale, Jinja, Mbarara, Kitgum and today in Kasese.

Police claims that FDC meetings are illegal, they don’t have a legal permission from police as regards to Public Order Management Act (POMA).

Besigye relatedly, expressed the same concern after the Kasese incident on his tweeter page.

“Increasingly desperate: NRM/M7) junta (AVFs) today to deal with our unarmed presence in Kasese town! It was after stopping a planned public meeting. On 19th April, Mr M7 addressed rallies in Kasese.”