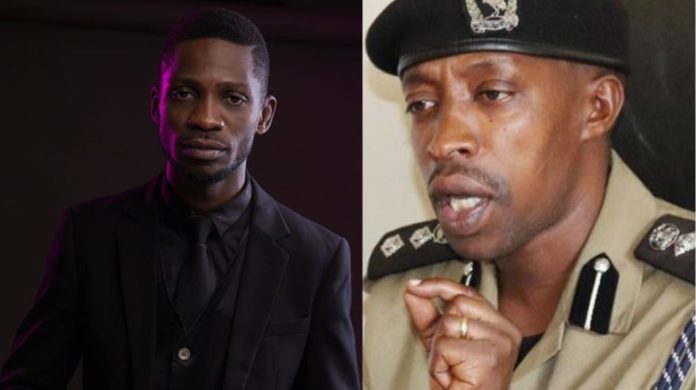 “Bobi Wine alleges that we stopped all his concerts, no we didn’t. All we did was to discuss all those guidelines that if anyone complies with those then we will have no reason to council his shows”, Kayima speaking.

However, Bobi Wine dismissed all police claims stating that he followed every guideline but his shows were stopped.

“Police wen a head to block my shows in Gulu even after we wrote to police informing them of the event and asking for security. More than a month prior to the event and as if that was not enough, yesterday when I walked to meet the inspector general of police and protest the illegal blocking of my shows, even if he was in office I did not see him”, Bobi Wine points out.

The singing legislator claims that he was not given any explanation as to why his concert was blocked. Though police through their spokes person Kayima noted that, all reason for blocking Bobi Wines concerts were plainly stated to him and his other members.

“We had a lengthy meeting with him and his team and we discussed in details what needs to be done. We hope that they will really see the point in what we are championing”, Said Kayima.

Likewise, Kayima stated out guideline to be observed by artistes and concert organizers before verifying their shows. To protect lives and properties during this festival season to all Ugandans.

“Organizers must write to the inspector general of police for clearances where there concerts will be, how they have reached an agreement with the owners and managers of the venue, where they will hold them . Live in the fact that concerts attract crowds and therefore needs to be secured thoroughly”, Kayima said.

While in parliament legislators assigned Obiga to account the cancelation of Bobi Wine’s concert where he told legislators that he turned his shows (Kyarenga concert) into political rallies, that’s the reason behind objection off his shows.

“When you get clearance for a rally or a political activity they give you a program if you go on the other side and do totally different things obviously the police has the right to ask you, no no this is not what we agreed on. What is the reason? Police is not the reason; the reason is the maintenance of law and order. The police has to be sure that the message you are going to pass to public is not going to cause anxiety or break down of law and order”, Obiga explaining.

He further stated that government has no problem with Bobi Wines rallies as long as he abides by the laws governing rallies in Uganda.

“If I am NRM and organizing a rally and all that I am going to do is to insult FDC in the rally. Do you think there are no people of FDC in the rally who will get annoyed and obvious there will be a breakdown of law and order. So to avoid that management act which was made in this parliament stick to the rules, stick to what you said you are going to do and things go on smoothly”, Minister Obiga.

In addition Obiga said police has no right to stop political rallies.

However, legislators also reacted towards Hon. Kyagulanyi’s concert blockage, stating that the police have stopped Hon. Kyagulanyi from doing business which is not a political activity.

“Where do you get authority from? (Police) the role of police is to keep law and order and to punish law breakers. They mean that Bobi Wine when he became a Hon. Kyagulanyi he broke a law?” Hon. Medard Ssegona pointed out his view on the matter.

Bobi Wine also said that they intend to petition the committee of defense in parliament and ministry of internal affairs.

Besides Bobi Wine’s Kyarenga concert that was meant to be at Mandela National Stadium faced a lot of difficulties when the management declined hosting his concert. Though Bobi Wine had earlier on paid a commitment fee, he was not allowed to hold his concert at the stadium and later changed venue to his one love beach Busabala.

Also, police blocked another concert on Sunday in Gulu district.