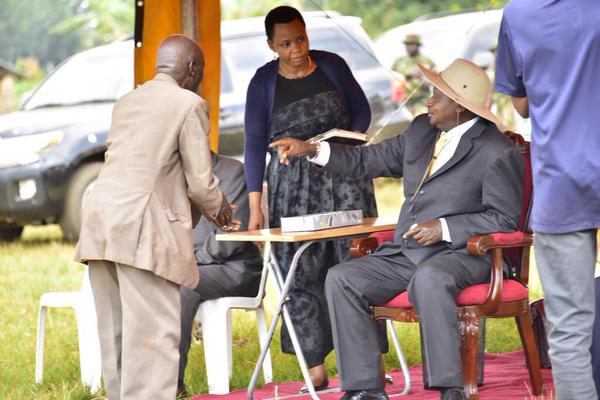 President Museveni once had a powerful personal assistant known as Maj Edith Nakalema, She has now returned to State House.

Nakalema, who was in July 2017 sent to London-based Shrivenham Defence Academy for a Senior Command and Staff College course, will still serve in the presidency.

“My officer, Maj Nakalema, who has been away on a course, has returned. Send information about corruption to her number,” said President Museveni.

Nakalema left State House in the midst of a heated power struggle at State House that saw several powerful aides kicked out.

Many thought she had fallen out of favour since security reports had queried her integrity.

Nakalema’s return to the center of power emphasizes the President’s trust in her.

“These are easy to uproot.  Just get information on them and pass it on to the toll-free number 0800-100770 belonging to my office.  This is in addition to a unit I announced during the June 2018 State of the Nation address. You will see what we shall do with them.”

He emphasized: “You heard what I did with the officials in the Ministry of Finance, Immigration and Uganda Revenue Authority.  This is a problem that persists because the crooks are not exposed.”

Nakalema, a Special Forces operator, wielded immense power during her reign at State House and was believed to be more influential than the Principal Private Secretary who actually was her supervisor.

The President’s Press Secretary, Don Wanyama said that the course was “critical for her military career and has nothing to do with tension at State House.”

We shall keep you posted on all the developments. Keep it Flash Uganda because we are “Always on Point”.