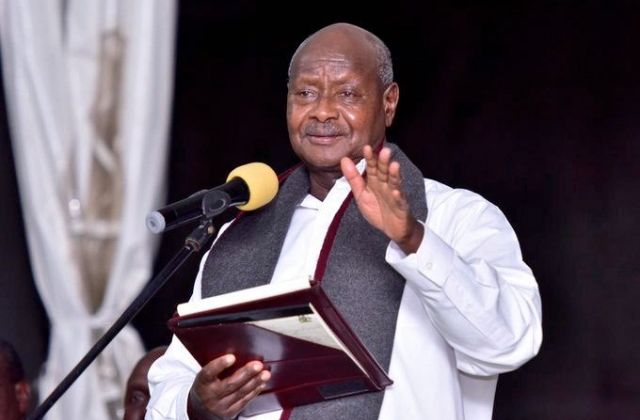 The president said that these opposition leaders keep on altering and crippling facts about government programmes with intentions of tarnishing government image.

The president made the remarks during a thanks giving service for Omoro District Woman Member of Parliament Catherine Lamwaka, held at Opit Primary School grounds in Opit Town Council.

At the ceremony the president pledged to construct the district hospital and he also wants the road connecting Gulu to Moroto constructed including re-roofing of all schools that were affected by the recent stormy rains among other things.

“I came here to thank you because politics is about choosing good leaders. Good elections, voting right leaders to come to parliament like Catherine Lamwaka, to support and steer government development programmes, that is why we should have celebrations like today. When you vote wrong leaders you get wrong results,” the president said.

“NRM guaranteed that leaders are chosen through good electoral process. The returns of this process today is the infrastructural development that the government has put in place like the network of tarmac roads in the region and in sectors of education and health,” Museveni added.

Museveni also argued Omoro district residents to embrace projects and activities that aim at poverty eradication in their homes, since the area is now free from wars.

After, he handed over 1.6 billion shillings to six sub-counties and I municipality in support of the National Uganda Social District Action Fund (NUSAF) development programmes in Omoro District, and also pledged 30 million shillings to Bodaboda SACCO.

However, Lamwaka in her message to her guests and supporters attributed her success to the support she received from president Museveni. She said Museveni participated in two public rallies campaigning for her and that includes Tochi County and Omoro County in Omoro District.

Rev John Baptist Odama, the Archbishop of Gulu Archdiocese at the occasion, argued all Ugandans to embrace forgiveness, reconciliation and unity. And condemned corruption and human trafficking that is on increase in the country.

He also thanked MP Lamwaka for her support rendered towards residents in her constituency and asked her to encourage them advocate for peace, unity and reconciliation.