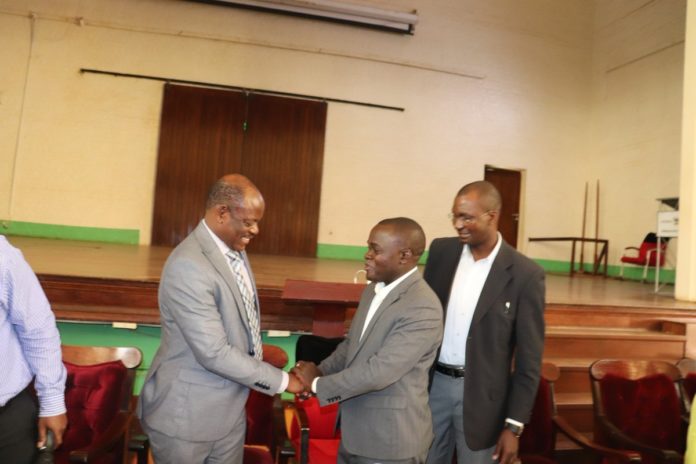 For the first time in two weeks, Makerere University Vice Chancellor has accepted to hold talks with the striking staff. Prof Barnabas Nawangwe, before the General Assembly informed the Teaching and Non- Teaching staff that the institution needs all parties despite their different opinions.

Prof Nawangwe agreed to make up with staff which is yet to be fulfilled.

“I have agreed today that we begin a new chapter of mutual respect.”

While in the meeting, Dr Deus Kamunyu the suspended Makerere University Staff Association (MUASA) chair stated that he as a person, he is a very honest person with honest resolution.

“I am a very sincere person who sit on the table and agrees to be sincere and for sincere decisions, to be born.”

Dr Tanga Odoi delegated to take up the role of uniting the two parties that had teared a part as negotiations begins.

Odoi in his appeal to lectures asked them to respect Nawangwe’s apology.

“We were together with the VC in the assembly and he has agreed to make an apology. It doesn’t need a degree of bravery because rumours are all over here, rumours to the VC, rumours to the chairperson MUASA but we had a very good meeting of two hours with the VC, to say sorry is not to say I am weak. The VC has showed a very good example,” Dr Odoi said.

Prof Nawangwe and Dr Kamunyu offered themselves a handshake accompanied by a hug as they concluded the meeting, which cheered up the staff.

“As management I am committed to begin a new chapter. And that the dialogue to create total harmony, total mutual respect, continues, so that our University can rise higher,” Prof Nawangwe said.

But this did not last long with the University’s association general assembly continuing that the withdraw of labour is still on until the suspension are lifted.

“We are going to go back home until at least one demand is met, one of the staff noted.”

One Tuesday 5, February the committee instituted by Prof Nawangwe to investigate Kamunyu’s case will start off, its activities.

And those affected by the strike are now starting to see light but it’s not yet over until the lecturers enter class which is expected in the end week.

Dr Michael Walimbwa the MUASA General Secretary said that: “very soon we are returning to class. That isn’t a problem anymore, it’s just a matter of time and if things go well the way they are, if negotiations work out, even tomorrow we can return to class. We are really in the final stages.”

Walimbwa continued to state that one of the key issues to be corrected before class time was that staff wants two members of the council dropped simply because;

“some members are considered to have been in the council for too long and their time of being there for that long, may be some people are not happy with their performance.

So, that could be one of the reasons and that is why some people are saying that why don’t we have newer ones? Such that we can see what happens may be newer ones can bring a difference.”

After, Walimbwa on behalf of the other staff offered his apology to the affected parties including students and parents.

“First of all, the students, parents, we are really sorry from the bottom of my heart. I want to apologies that we have inconvenienced you. But to us at Makerere this is like a delayed flight, the moment the flight has delayed it can always take off later but still reach the destination. I want to assure you that we are going back to class very soon and the moment we do that we shall catch up with everything and of course we thank you for your patience, and we would like to beg you to remain patient, because we are going to take may be one or two days but you’ve been patient enough we thank for that.”