Investigations into the alleged death threats by State Minister for Investment and Privatisation, Evelyn Anite from a mafia group in the country is in progress to prove or disprove the allegations by Uganda Police Force.

This follows Minister Anite’s pronouncement during a press conference in Kampala saying that her life is in danger following mafia threats to kill her.

Anite said the mafias are in a plan to remove her out of Uganda Telecom Company issues by plotting to kill her after she stood in to save the struggling UTL and expose the bad elements in government.

“The Mafias, the cartel, that’s used to intimidating, robbing this country, they are yet again plotting a move to kill me. The plan by the mafias is to take Anite out of the picture, I might die but history will judge them. You know the mafias, they are the ones who have been blocking the audit,” minister Anite said.

Police spokesperson, Fred Enanga in a media briefing earlier on Monday revealed that police has instituted a team of CID officers to investigate the matter.

“We have the task team from the Directorate of Criminal Investigation (CID) that recorded a very comprehensive statement from the Minister of State for Privatisation and Investment, Hon Evelyn Anite and are now actively pursuing a numbery of lines of inquiry to help prove or disprove the claim of alleged death threats or alleged threats over her life by the perpetrators whom she is mentioned,” Enanga said.

Meanwhile, police have warned the public against misusing Social Media platforms by posting malicious information regarding the matter, saying they should stop and allow police to do its work because such statements cripple police investigations.

“As we further with investigations, we’ve noted that there’s a lot of malicious communications and online runs by parties on either side via Social Media, and we want to warn whoever is doing that to stop and allow our investigation to determine the claims,” Enanga stated.

“The public must know that the Police takes all forms of threats to life seriously, and we are prepared to expeditiously investigate this matter and this time there are no threats yet! but we have increased vigilance on her security both close body and at her residence. We would like to inform all her family, members of her constituency and the wider public that she’s well protected all around and any additional protection and related security adjustments, if the situation worsens, will be provided,” Enanga noted.

READ  Adding salt to the injury, Bobi Wine referred to the CID 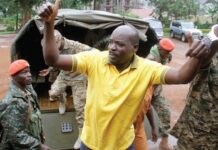