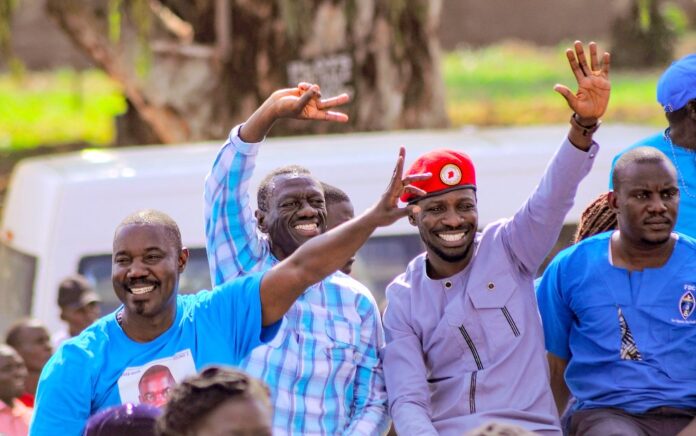 Speaking at the final campaign rally on Thursday, Bobi Wine who spent the day in Soroti City, drumming support for Attan said NUP decided to support the FDC candidate in the spirit of the unity of the forces of change.

Bobi Wine said Uganda’s problem is President Museveni’s government. He challenged the opposition should unite as one to end what he termed military rule.

“We firmly believe that we are stronger together. Uganda’s problem is Museveni and military rule. Our struggle must always be a Ugandan struggle. I have rallied the people of Soroti to turn up and vote, but most importantly to guard and defend their vote. I have no doubt in my mind that victory will be on the side of the people,” Bobi Wine said.

In his words, Besigye said the spirit of brotherhood by the opposition is enough to show that the country can be liberated from NRM’s rule.

Besigye challenged Ugandans to wake up and demand their rights.

The two were, however, in the company of other opposition affiliates including Lord Mayor Erias Lukwago and Nandala Mafabi who in his words said “The people of Soroti have spoken and are willing to go and vote for Attan Okia on Thursday. NRM is in panic mood. They are removing NINs from people. They are using money to pay people at night. All government vehicles, ministers, police, and the army are here. The NRM government should know that this is an election, not a war zone.”

The Forum for Democratic Change candidate Moses Attan whose previous victory was annulled by the Court over irregularities is contesting for the position with NRM’s Ariko and Pascal Amuriat of the Uganda Peoples Congress party.