14 test positive for COVID-19 from the community in Uganda as all truckers test negative.

On Sunday, 24 May, the Ministery of Health (MOH) confirmed that there were 14 cases in the community testing positive for COVID-19 in Uganda.

According to the health ministry, the 14 Ugandans tested positive from a total of 1,084 samples from the community members and contacts.

“Results from samples tested on 24 May 2020 confirm 14 new COVID-19 cases. All new cases are contacts to previously confirmed truck drivers”.

“They were under quarantine at the time of test,” a statement from the Ministry read adding that all samples from truck drivers totalling to 655 tested negative yesterday.

According to the Director-General Health Services, Dr Henry G Mwebesa, five of the cases including two males and three females are residents of Adjumani district.

The other three cases all of male Ugandans are residents of Elegu, Arua and Oyam districts respectively.

Meanwhile, the MOH says that five positive foreign truck drivers (all Tanzanians) were handed over to their country of origin yesterday bringing the total number of those that have since been deported to about 211.

Since the outbreak of the novel coronavirus, Uganda is among the few countries globally that have recorded fewer cases more so among its community members.

In recent weeks, Uganda’s biggest percentage of new COVID-19 cases have come from the truck drivers via border entry points including the foreigners until President Museveni directed the MOH to deduct them from Uganda’s case count.

With now a total of 212 confirmed COVID-19 cases, Uganda is yet to record any deaths from the virus as of today and 68 people have since recovered from the deadly coronavirus.

Currently, the MOH says that there are 161 admitted COVID-19 confirmed cases in 10 regional referral hospitals countrywide.

Elsewhere, the pandemic continues to spread globally with up to 5,516,842 confirmed cases and 346,949 deaths as of Monday morning according to statistics from the Johns Hopkins University.

In Africa, the total confirmed cases have now risen to 111,812 with the number of deaths also hitting 3,354 on the continent. 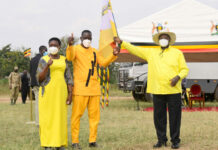