Vipers Sports Club has stretched their lead at the top of the StarTimes Uganda Premier League after a narrow 1-0 win over struggling Wakiso Giants.

In a game played yesterday at the St.Mary’s Stadium, Kitende the home side came determined to do better and at the end of it all they didn’t disappoint.

Despite the limited number of chances they created, Vipers were still the better side on the day and this was displayed on the scoresheet through skipper Fahad Bayo who scored the day’s winner.

Bayo scored the Venoms only goal in the 30th-minute after meeting a Byaruhanga’s through pass to put it past Wakiso’s goalie, Yasin Mugabi.

Meanwhile, Wakiso Giants came into this game without a known manager days after the club had parted ways with Kefa Kisala who joined the club at the start of the season.

In a game played at the FUFA Technical Centre in Njeru, Express gave away a two-goal lead after Maroons came from two goals down to grab a point.

The Red Eagles took the lead, only 13 minutes after kickoff through a Frank Kalanda who converted a spot-kick after Shafiq Avemah’s shot was handled in the 18-yard box by Sylvester Okello.

17 minutes later, Express through Frank Ssenyondo made it two-nil to finish the half time with a comfortable lead.

On Resumption, Maroons who looked completely a different side and showed no signs of giving up bounced back to level matters.

Fred Amaku gave Douglas Bamweyana’s Maroons some bit of hope after his consolation goal to put the score at 2-1.

Maroons didn’t look back but kept on pressing and finally, they got their reward through in-form striker, Steven Mukwala who scored to put the score at 2-2.

The final whistle ensured that both teams shared spoils in the StarTimes Uganda Premier League.

Meaning, Express FC move to 7th position on 14 points while Maroons are 5th with 17 points.

Meanwhile, Vipers top the 16 teams log with 30 points, six more ahead of second-placed BUL FC who played to a goalless draw with Arua Giants, Onduparaka Football Club in another encounter.

BUL FC now has 24 points from 12 games whereas Onduparaka is 3rd on 20 points. 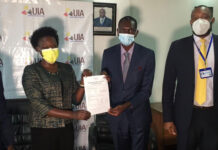