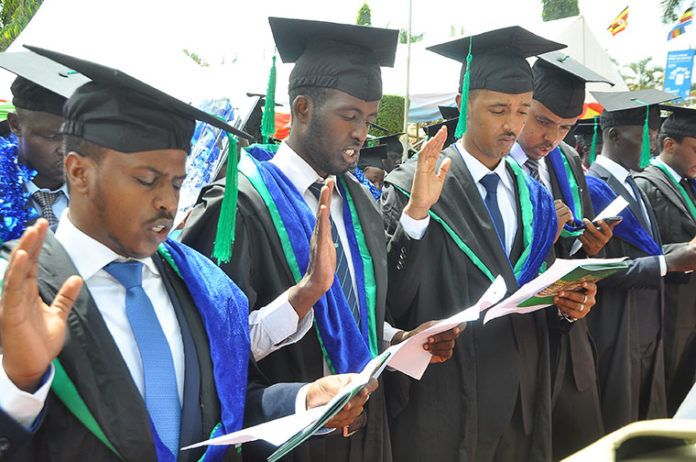 Kampala International University is one of the fast rising tertiary private institutions with thousands of students and graduates every year from tycoon Basajjabalaba’s university located in Kansanga. During the celebrations, Bassajja thanked Museveni for ordering the arrest of Gen. Kale Kayihura for masterminding several murders and other crimes in the country.

While addressing students and parents, the Guest of honor and president of Uganda Yoweri Kaguta Museveni advised and tipped students to go and create wealth for themselves or go and work for others either in the region, or globally.

Over 2,410 students graduated last Saturday at Kampala International University (KIU) during the University’s 18th graduation ceremony. Among the graduands where 22 who scooped first class degrees, 3 PHDs and several second grades.

Yoweri  Kaguta Museveni added that  students should be entrepreneurial despite their new education milestones..

Kampala International University having one of the best medical schools in the region, Museveni told the new graduates that there is high need for nurses on the international market whose job description would involve taking care of the elderly white people abroad. He also hinted on the fact that midwives are needed in Africa than abroad explaining that Africans over produce compared to whites.

Kampala International University now joins other universities like Makerere University, Ndejje University, Kyambogo University and IUIU to have the highest number of graduates in one academic year.

Flash Uganda Media congratulates all the graduands and wish them success.