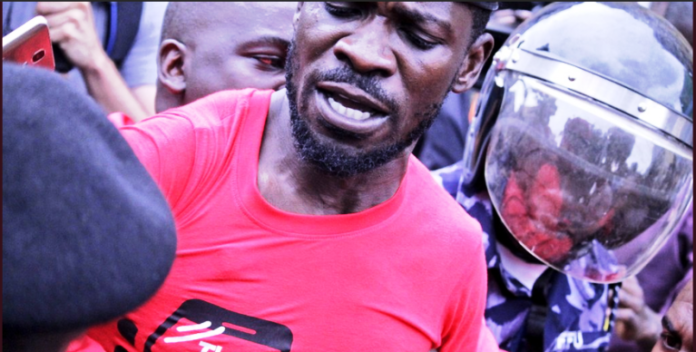 Bobi Wine was expected to report at the Directorate of Criminal Investigations on Friday at 2pm, to record a statement and interrogation.

After one hour, Bobi Wine’s lawyers arrived and were later engaged in a closed door meeting with the police, where they reasoned out their client’s inability to appear before them.

They said that the summons arrived rather late and Bobi Wine had other urgent meetings to attend.

In the police summons, Wine is accused of inciting violence and defying orders when he proceeded with his Kyalenga extra music show on Easter Monday, after police blocked it.

And in the process both police and Bobi Wine’s lawyers agreed to hold the session on Monday 29th of April 2019.

“His Lawyers they came to Kibuli and reported on his behalf. We had a brief chart with them, and we agreed that they will be producing him on Monday at exactly 11am. So, we are waiting for you,” Vincent Ssekatte, police spokesperson CID said.

“Well for us it’s not our job to speculate, we will wait for the Uganda police force to prefer charges against him and we will respond appropriately. In the summons they were talking about disobeying orders from the Inspector General of Police,” Benjamin Katana, Bobi Wine’s lawyer stated.

At the burial ceremony of Bugiri District chairperson, Sirajye Byabala, Bobi Wine said he escaped from prison, in his own house to attend the burial. A statement which contradicted the one police gave out, police said earlier that there was no military presence at his house in Magere at the time he moved out. This means that one of the two told lies.