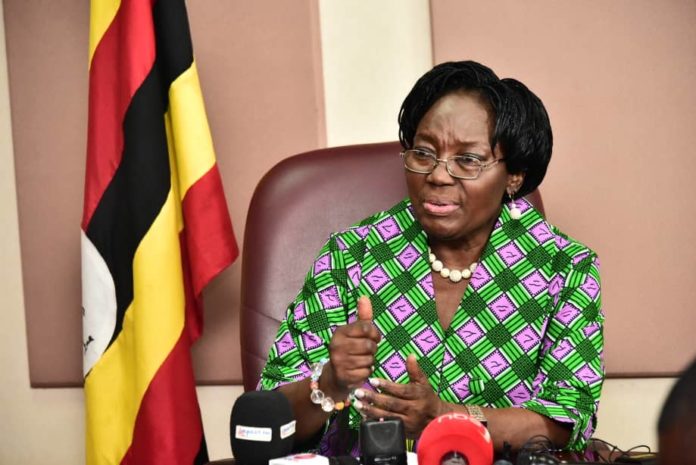 Parliament was on Friday 26 of April filled with moments of joy, as the Speaker of Parliament, Rebecca Alitwala Kadaga, returned to the House after one month of illness.

Hon Kadaga appeared at parliament to launch a website for the 64th common wealth parliamentary conference, which was last here in 1967, scheduled for September 2019 in Kampala, under the theme: “Adaptation, engagement and evolution parliament in rapidly changing common wealth”. In the Speakers Board room at parliament.

It was all jubilation as organisers of the 64th Common Wealth Parliamentary Conference, welcomed her from her one-month illness.

Kadaga fell ill last month after returning from official duties in the United States of America. And after landing at Entebbe International Airport, she was quickly rushed to Nakasero Hospital. But Doctors later referred her to Aga Khan Hospital in Nairobi Kenya for more Medical attention.

She appeared healthy, strong enough with her ever natural smile on, on this first time appearance at parliament since she fell sick.

Kadaga, began by launching the website of the 64th Common Wealth Parliamentary Conference, set due from the 23rd to the 29th of September 2019 in Kampala, under the theme Adaptation, “Engagement and Evolution of parliament in the rapidly changing common wealth.” But did not mention issues regarding her health.

“We are proud to host this conference; they were last here in 1967, they were fewer and it was smaller. The Ugandans were also fewer, so we are really happy to add to that. And this is part of parliamentary diplomacy.”

She says; all delegates from the Common Wealth Parliaments, will register the attendance through this website, discover key true features in Uganda, history of Ugandan parliament among others.

Kadaga however, pointed out the benefit Ugandans have at hand, in this Conference which is expecting to host over 900 delegates.

“Now the benefits for the people of Uganda are many, first of all, the time if one delegate was to spend just $2000 a week, here it will translate to a lot of money going into the economy. And they are not only going to be in the Hotels, they will be getting out to go to the shops, to buy things in the market. So, there’s going to be money getting into the population,” Kadaga said.

“Additionally, the organising committee is planning to create a facility for the Ugandans, to go and exhibit near the Conference Centres, and also at their hotels, those who have things to sell at their hotels can also sell them from there.” So, there are going to be quite a number of benefits, but for the long term, marketing the country, so that more people know about it, take more interest in it, investments etc., etc. So, there are many benefits for the people of Uganda,” Kadaga added.

The last Common Wealth Parliamentary Conference was in 2018, hosted by Bangladesh.