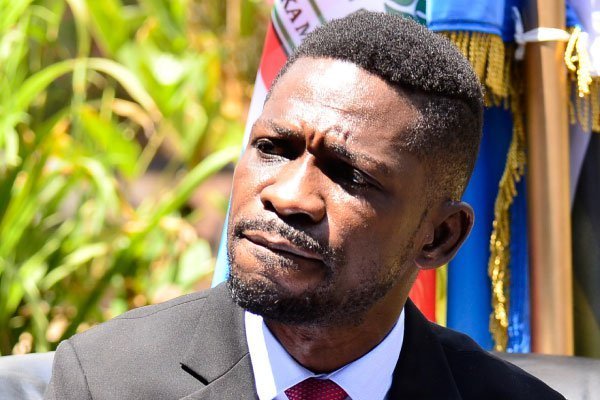 “I have heard that they want to evict our people from their houses. Even if it is still only a rumor, we know that in the recent past people have been illegally evicted from their land. So I am sending a message to whoever is saying that they are going to demolish people’s houses here in Kamwokya and evict people within a week that is simply a bad joke. We as the people of Kamwokya are sending  a strong message to whoever  is intending to demolish our structures, just know that when you’re coming here to attack us illegally you will either kill us from here in Kamwokya or you will not leave this place alive yourself,” Robert Kyagulanyi said

Addressing his fellow Kamwokya residents/landlords yesterday evening in an immediate meeting to discuss the rumours of the impending eviction, Bobi Wine said:  “Nobody has a right to evict you from your land, any land eviction is supposed to be bound out of court orders and that court order is supposed to be a result of a legal process. That has not happened yet, so I want to assure all of you that you’re not occupying wherever you are occupying illegally. The law protects you whether you’re ‘Bibanja’ owners or ‘land’ owners. The same law protects the people of Kololo the same way it protects people the Ghetto of Kamwokya.”

“I want to call up all of us to stay calm, stay focused to work together with our leaders, but when these people try to attack us I want you to be ready to defend yourselves. To the leaders, you are not bosses, you’re supposed to be servants of these people, so whatever you say is supposed to be a reflection of what these people are saying. I am calling upon us to hold all leaders accountable.”

This came after romours that Bobi wine and his neighbours were given ten days to vacate or forcefully evicted.