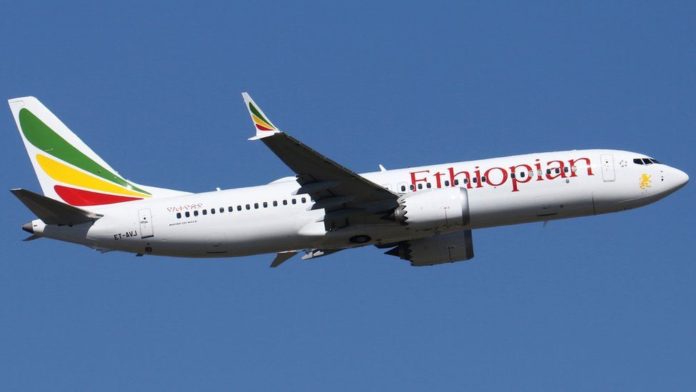 Ethiopian Airlines spokesperson on Monday said that it has grounded the rest of its Boeing 737 Max 8 Aircraft as “an extra safety precaution” after one of its aeroplanes killed 157 passengers on board, Sunday morning.

This followed Ethiopia’s declaration of Monday to be a national mourning day after finding the plane’s wrecked ‘black box.’

It’s not yet clear what really caused the crash of this newest plane in clear weather around Bishoftu, 50 kilometres (31miles) south of the capital Addis Ababa on Sunday 10 of March 2019.

Asrat Begashaw, the Ethiopian Airlines spokesperson, said the Airline decided to ground its remaining four aeroplanes 737 Max-8s until further notice. He adds Ethiopian Airlines has been using five of the planes and 25 more awaited deliveries.

Other Airlines in the diaspora including Aviation authorities in china, Indonesia, and Caribbean carrier Cayman Airways have decided to ground their Max 8s temporarily as investigation on Boeing 737 continue.

Scattered debris close to the blackened crash crater were gathered by Red Cross team including remains of the 157 lives lost, a battered passport, business cards in different languages, as heavy machinery digs to find the larger pieces of the Aircraft.

Ethiopian Airlines Official who spoke on anonymity because he’s not allowed to address the media said that the search team uncovered the “black box” of flight data and cockpit voice recorder. The Airlines Officer continued to say that the box was partly damaged and “we will see what we can retrieve from it.”

Asrat, spokesperson Ethiopian Airlines, said forensic experts from Israel had arrived to help with the investigation. The investigation process is piloted by Ethiopian authorities aided by the US, Kenya among others.

Ethiopian Airlines said the senior pilot lost all contacts shortly after releasing a distress call and was asked to make a U-turn, they said the plane eventually flowed into the ground Hejere close to Bishoftu.

“I heard this big noise and the villagers said that it was a plane crash, and we rushed to the site. There was a huge smoke that we couldn’t even see the plane. The parts of the plane were falling apart,” a local resident, Tsegaye Reta stated.

Macharia says Kenya lost 32 people, the biggest number of all other countries and for now families of 25 victims have been contacted and their well-being catered for.

“Some of them, as you know, they are very distressed, they are in shock like we are. They are grieving.”

The other countries which lost citizens include; china, Italy, Britain, Egypt, Germany, India, Slovakia, USA, Canada, and Ethiopia among others.

Also in the same plane crash 19 UN-affiliated employees died in the incident as estimated by the UN migration agency. They included the UN refugee agency, the World Food Programme and UN Officials.

Nairobi and Addis Ababa are major hubs for humanitarian workers, and some of them were heading for a huge UN environment conference set to kick off money 11 of march 2019, in Nairobi, Kenya. However, at the conference UN flags flew half-staff, mourning their fallen staff.