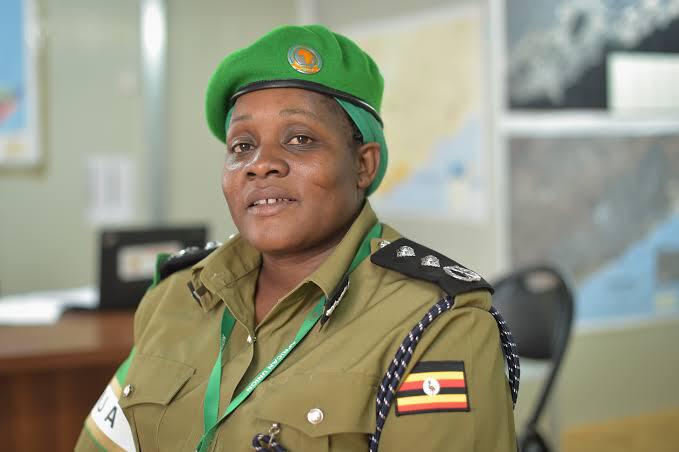 Police has now confirmed the death of AMISOM police commissioner, Christian Alalo, who was involved in the Ethiopian Airlines plane crash that happened Sunday morning at 8:38 10 of March 2019, shortly after take-off, killing 157 people.

Alalo, was among those that were identified as employees of the United nations. She has been the acting Commissioner for eight months.

According to police, the other Ugandan thought to be is not yet identified.

Fred Enanga, Police spokesperson has confirmed Christian Alaro’s death, after she was listed among the UN staff that lost lives in the disastrous Sunday morning plane crash.

“Alalo Christian was working with African Mission in Somalia (AMISOM) as the acting police commander. And at the time of the tragic incident, she was on her way from Italy to Mogadishu Somalia, where she’s on her tour of duty.”

This report however, has ended speculations of Alalo’s involvement in the plane crash.

Now authorities in Uganda have a lot to do to find the other Ugandan who’s still unknown but listed among those whose lives ended in Boeing 737-800 Max Aircraft.

“And even our officer, was appearing under the list of UN personnel. So, I still believe that there’s an additional Ugandan who was involved.”

Alalo served AMISOM for three and half years now, and for only eight months she was serving as the acting Commissioner at the time of her death.

“When the area is recovered, then it should be followed by stabilisation and one of the stabilisation programmes is bringing the police on ground.” Alalo’s messages on their progress in Somalia.

A Police task force has been instituted piloted by Dr Mosses Byaruhanga of Mulago hospital, who will travel alongside a family member to identify Alalo’s remains.

“Also notified the family members that the positive identification process and other protocols at the African Union will probably cause delay in the arrival of the remains of the officer. But the IGP has tasked the director, police health services Dr Byaruhanga, to travel in advance with an immediate member of the family to support the identification process. Because most of the bodies were burnt beyond recognition.”

Alalo died on duty, she was from Italy heading to Somalia. She is survived by two sons.

She’s a hardworking Officer and that’s why she kept working with AMISOM until the time of her death. Police says at the moment they are waiting for a statement from civil aviation authority on the possible identity of the other Ugandan who was on the plane and share it with the public and organise the return of the remains.

The plane was on its way from Addis Ababa to Kenya’s Capital Nairobi when it crashed six minutes after take-off killing all the 157 people on board.

Plane recordings from Boeing 737 have been recovered by investigation team and for now we are waiting for an Official communique from Ethiopian Airlines, on what caused the crash six minutes after take-off.

China Airport decided to grounded it’s two Boeing 737-800 Max that they bought were taking into account Indonesia and the Sunday Ethiopian plane crash just about six months ago.