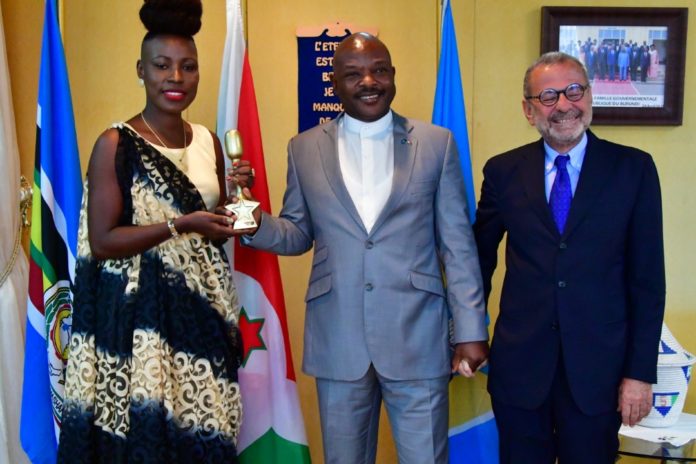 Saturday 16th March 2019 was a day to appreciate and award the most outstanding entertainers in Africa at Kampala Serena Hotel during the prestigiuous HiPipo Music Awards where artistes like Davido, Sheebah, Yovi, David Lutalo, Diamond Platinumz, Bobi wine, Nina Roz were awarded for their excellent performance last year.

Among the winners was the super talented Burundi’s singer Natacha La Boss who emerged winner of Africa’s Fan’s favourite fresh Talent and yesterday she presented this award to Burundi’s big man President Pierre Nkuruzinza who Praised Natacha for Representing Burundi and for being an excellent artiste who has not only exported Burundi to outside world but has also promoted the music industry.

Natacha La Boss was the first ever Burundian to scoop an award at HiPipo Music Awards.

This year’s HiPipo Music Awards included 10 Africa centric categories including Africa’s Number 1 Award which was won by Diamond Platinumz. The categories highlight excellent works of art from over 15 African countriesTo be considered eligible, an artist must have had active performance and/or released audio or video music content within 12 months prior to 1st November of every year.  The 12 months eligible period is for works (Audio or videos) commercially released between October 2017 to November 2018.

Click this link to watch video of all the winners