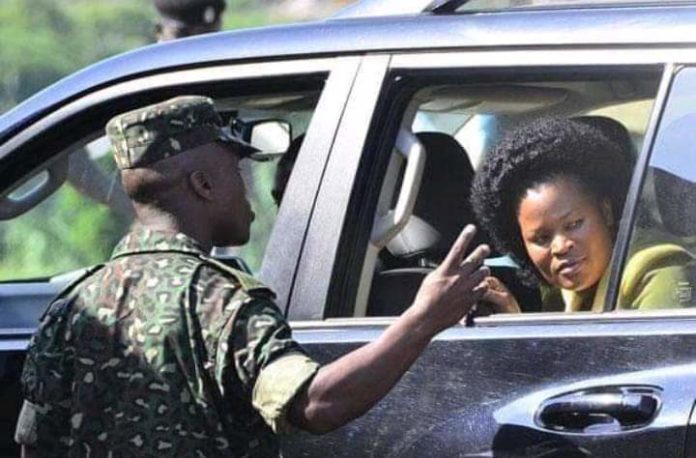 Nagogye residents in Mukono District say Ronald Ssebulime, the man who was shoot, and killed on Sunday was innocently killed. Ssebuliime was suspected to be following Hon Idah Nantaba, the State Minister of ICT with intentions of Hurting her. Nakabugo village in Busiro County along Mityana road is where Ssebuliime’s home, the alleged attacker of Min Nantaba is located.

Ssebuliime’s death arrived after he was suspected to be tracking the Minister Nantaba Idah’s movement earlier on Sunday. Which was false, according to his sisters’ statements Ssebulime was on his way to St Andrew’s S.S Kabimbiri to visit his children at school.

“I was already at St. Andrews S.S.S Kabimbiri and he was late because he had his motorcycle malfunction. He told me he was attempting to repair it but would join us,” Irene Nakazibwe stated.

Ssebuliime’s family says he was working as a welder, making door and window frames. He lost his wife in 2012 and he has been a devoted single parent of four children.

Irene Nakazibwe, Ssebuliime’s sister said on the fateful day, says that on the day he was killed, he was going for the visitation day of his two children one in senior one and another in senior three at St Andrews Secondary School Kabimbiri, located in Kayunga district.

“But I think this is someone who didn’t even think that he was bypassing a Minister. It was Visitation Day but he rarely uses the road unless we are going to see the girls.”

Nakazibwe says she last spoke to him at around 11am, he delayed to arrive at school because he was still repairing his bike which hard some breakdowns and when she tried to call again the phone went unanswered several times.

After that long wait, Nakazibwe says they left the school boarded a tax, going back home. After a short while on their way home, they got shocking news of their person death.

“She called Irene, Ronnie has been gunned, we burst, we had reached Gayaza town.”

Nakazibwe says the family was supposed to gather at Ssebuliime’s home in Nakabugo village but the LC I chairman warned them not to after his home was heavily deployed by security personals.

“As they were sloping down coming this side, they told them Simama! They stood, they said you mean we are not supposed to come, we didn’t know! we didn’t know you people were here. They had to push her and slapped her on the back, then she rolled to the other extreme end.”

Then Monday morning in the presence of Ssebuliime’s sister his home was thoroughly searched but nothing deadly was found. And according to chairperson Nakabugo village, Mr Walabyeki, Ssebuliime had no criminal history soon after completing the search of his house.

“At least police found nothing in the house let’s hope the investigations will be complete soon and a report issued immediately.”

Ssebuliime’s friends were totally in shock after learning that their friend was shoot dead in a suspected killer attack.

“I felt bad when my friend was killed, because the time we’ve spent together I haven’t seen anything or any act he does related to theft.”

At St Andrews S.S.S Kabimbiri, school staff confirmed that they knew Ssebuliime’s Motorcycle, though they refused to appear on camera. They also said that his children have been expecting their father’s visit.

Also Motorcycle association and other bicycle riding association, said that the incident has left unanswered questions in them.

“They said the two parties exchanged bullets but we did not see that, and no evidence indicating he had deadly equipment.”

They also say, every time of the day they ride a Motorbike, even when they are not Havering in tensions, they try to watch both of their sides left and right, as investigation proceed.

However, residents of Nagogye where Ssebuliime was assassinated also aired out what they witnessed.

According to residents before Ssebuliime was killed, he tried to ran to the nearest banana plantation near St Francis’s church, a few meters away from the main road but later caught him.

“They made him sit down and fired two bullets on the floor asked him to reveal where the gun is? Then he said I have nothing to tell because I have no gun. He dropped his bag and without any resistance he surrendered as he lifted his hands up.”

“After catching him when he was trying to run, brought him back onto the patrol vehicle but then suddenly took him out gunned him twice, fell down and died while he was still chained.”

According to the residents the two men on the bike, were not armed.

“They were unarmed men, the claims indicating that there was exchange of bullets between the two parties are all false statements. They are the only people who fired bullets after seeing the motorbike.”