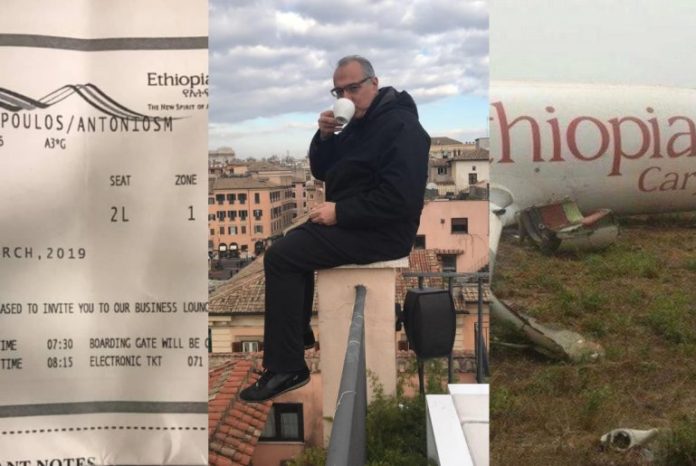 A Greek man who slipped death, said he would be the 158th passenger who would be dead today, had he not arrived late for the flight. But fortunately, he arrived past time, two minutes late.

“I was mad because nobody helped me to reach the gate on time”, “my lucky day.” As he showed his ticket on the Facebook post.

Mavropoulos, is the president of the International Solid Waste Association, a Non-Profit Organisation. He says; he was heading to Nairobi to attend the UN annual Environmental Assembly.

Athens News Agency said Mavropoulos, was meant to be on the flight, Boeing 737 Max 8s that crashed early Sunday in Ethiopia, but he was left out after arriving two minutes late.

He however, booked the next flight but Airport Staff blocked Mavropoulos from taking the plane.

“They led me to the police station of the airport. The Officer told me not to protest but rather pray to God because I was the only passenger that didn’t board Boeing 737 Max 8s ET 302 flight that crashed killing all the 157 passengers on board,” Mavropoulos said.

After getting the sad news from police, Mavropoulos says in his Facebook post that he was shocked.

And according to the Airports statements they wanted to interrogate Mavropoulos, since he was the only passenger among those who booked the flight and eventually missed the plane.

“They said they couldn’t let me go before cross-checking my identity, the reason I hadn’t boarded the plane.”

Boeing 737 Max 8s crashed into the field after take-off from Bole International Airport Addis Ababa on Sunday morning at 8:38am 10 of March 2019, on its way to Nairobi, Kenya killing 157 passengers from 38 countries who were on board.

50 kilometres (31 miles) into the journey south of the capital Addis Ababa around Bisoptu the plane crashed after the pilot lost control of it.

People with different kinds of passports worldwide, UN employees inclusive were on board.