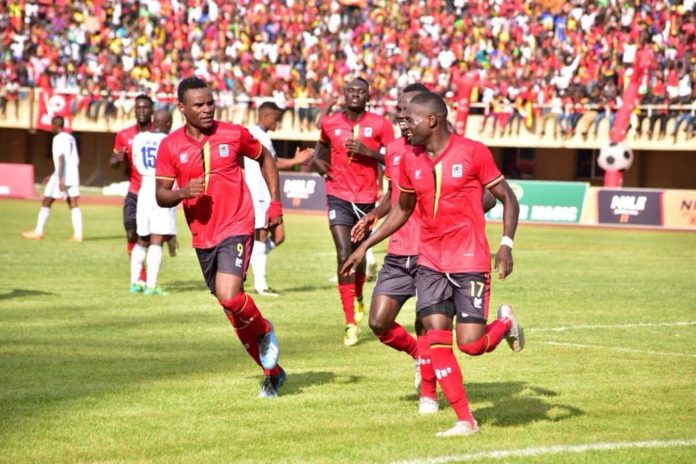 As the whole African continent is getting ready to face off in the African Cup of Nations that will be held in Yaunde, Cameroon, Uganda national team the Uganda cranes has already booked a seat in this competition after defeating Cape Verde at Namboole National Stadium this evening.

A match that started at a slow pace in the first 30 minutes became interesting when the cranes players led by Dennis Masinde Onyango launched several shots on target against the Cape verde.

Strikes from forward Farouk Miya, Kalid Aucho, and Dennis Guma gave Uganda a upper hand until the end of first half. The tension became too much for Sebastian Desabre the current Cranes manager who only needed a draw to qualify for AFCON.

With over 20 shots (7 on target), Uganda Cranes dominated the second half with attacks led by Wadada and Walusimbi the right and left backs respectively which gave Uganda Cranes an upper hand to win the match.

Happiness dominated Namboole stadium where thousands of Uganda cranes supporters gathered to cheer and support the record making boys when Henry Paddy Kaddu who plays for KCCA striked free header from Godfrey Walusimbi from the left wing leaving Uganda with 8 points clear from their competitors Tanzania who will take on Lesotho tomorrow Sunday.

At moment Uganda is still leading with 13 points, with no loss and have not conceded any goals, they are followed by Tanzania with 5 points, Cape Verde with 4 points and Lesotho with 2 points.

This is the second consecutive time for the Uganda cranes to qualify for AFCON in the past five years.

In the last game, Uganda cranes will be facing Tanzania in Dar es Salam.

We shall keep you posted on all the upcoming fixtures and news about the Uganda National team.