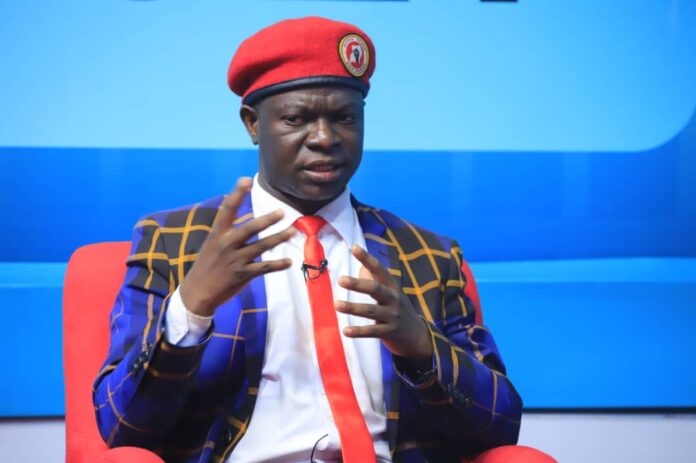 Muhammad Ssegirinya is a Ugandan politician, Journalist by profession, and the 2021 Kawempe North elected Member of Parliament. Ssegirinya belongs to the National Unity Platform (NUP) party.

During COVID-19 lockdown Ssegirinya used his Facebook account, which has more than 22,000 followers, to fundraise for his constituents who were struggling to get food during the COVID-19 induced lockdown.

Ssegirinya has a nickname Mr Updates’ due to his hunger to break stories online.

Ssegirinya says the reason why people like him, is because he’s always there for them.

In 2015, yet again, Mr Ssegirinya demonstrated against the Uganda Communications Commission’s (UCC) move to migrate the country to digital platforms. He insisted that the move to digitize the TV industry was against the down-trodden since they couldn’t afford the fees he deemed ridiculous.

“I might not have succeeded in stopping it, but people understood that I was on their side. Why do you make Ugandans pay for television every month?” Ssegirinya wondered.

Muhammad Ssegrinya began his political journey as a radio political talk show caller on almost all radio stations. He used to buy his airtime to make the phone calls on various radio stations.

Ssegirinya began the initiative while still in secondary school, he used to part-time as a cleaner at a restaurant downtown Kampala from where he earned money to be able to buy airtime to make the phone calls.

“I have always been a hustler,” Mr Ssegirinya says. “People think that politicians used to buy me airtime but that was propaganda. I was making my money by cleaning a restaurant found on Luwum Street called Mariz Restaurant at City Complex building.”

Ssegirinya believed by making phone calls, he would become popular and indeed he’s a popular Ugandan and now a parliamentarian.

He started the business at a young age, in 2006 while in senior three discussing political events of the day that aired on radios and a great critic of the ruling National Resistance Movement (NRM), Mr Ssegirinya was by then a Senior Three student at Pimba Secondary School in Kyebando, Kawempe North Constituency that he will be representing in the 10th parliament having won the 2021 ballot.

At the start of the business, whenever he would make a phone call, Mr Ssegirinya would introduce himself as the “eddoboozi lye Kyebando” (the voice of Kyebando) while making phone calls.

Later, when his ambition grew bigger, Muhammad Ssegirinya who belonged to Social Development Party (SDP) by then before joining National Unity Platform started signing in by describing himself as the MP to be Kawempe North while making phone calls into political radio talk show programmes.

Many disregarded Ssegirinya saying he cannot manage parliamentary duties since he cannot express himself in English the official language of Uganda. Having won the seat, people are wondering and still doubting Ssegirinya, however, we shall get to know when business for the tenth parliament commence.

“He used to tactically call into talk shows that are conducted in Luganda,” one of the people, who have known Mr Ssegirinya for quite some time, said. “English was a no-go area for him.”

Mr Ssegirinya’s dream has always been to be a leader, not anywhere else, and in Kampala. However, he no longer makes the phone calls.

Many radio callers, Sseggirinya started with have been compromised and they joined the National Resistance Movement (NRM). But here I’m, I have remained steady in criticizing the NRM regime.

Mr Ssegirinya’s first attempt at elective politics ended in defeat. During the 2011 elections, the rather impatient Mr Ssegirinya who was at the time a member of SDP decided to go after his dreams.

He took on Ssebaggala for the Kawempe North seat, but Muhammad Ssegirinya a novice politician lost the vote to the veteran politician maybe because he was still young. However, this showed Ssegirinya that he can do it.

Years later, Mr Ssegirinya jumped off SDP truck which had failed to get traction as its members had anticipated and boarded FDC vehicle the then-popular political party on the land.

He had noticed that Opposition politics around Kampala rotated around the alliance formed by FDC founding President Kizza Besigye and Kampala Lord Mayor Erias Lukwago and he consequently joined. This happened as 2016, general elections drew closer.

Muhammad Ssegirinya became a popular figure at all press conferences arranged by the two leaders. According to him, Dr Besigye and Lukwago were leading the cause that he had always believed in, though today they parted due to political party differences it wasn’t in bad spirit.

Ssegirinya contested in the 2016 FDC party primaries for Kawempe North parliamentary seat, but he lost.

After the loss, FDC members joined ideas and advised him that he should instead stand as a councillor representing Kawempe North at City Hall to console his loss.

Mr Ssegirinya’s advisors believed that unlike the MP seat he stood a greater chance of winning the councillor race which would give him more experience and indeed he won the seat and has been serving as a counsellor before running for the parliamentary seat in 2021 general elections.

Sseggirinya says it was a great opportunity that enabled him to serve his people of Kawempe North; therefore he has no regrets of losing the 2016 parliamentary seat.

Just like any other politician, Mr Ssegirinya says he has effectively represented Kawempe North at City Hall and in the process improved his voter’s livelihoods.

“From the salary of about Shs3m per month, I deduct off 500,000 which I give to my voters as capital,” I bought for them an ambulance, got young people blue-collar jobs at KCCA and many other things.”

In 2017, the Court of Appeal declared the Kyadondo East seat vacant after it kicked out FDC’s Apollo Kantinti and yet in a way, this proved to be another turning point in Mr Ssegirinya’s political career.

In the by-election process, Dr Besigye and the Lord Mayor insisted on supporting Kantinti, but Mr Ssegirinya broke ranks with them and supported Robert Kyagulanyi Ssentamu, alias Bobi Wine, a novice by then in Uganda’s politics.

After the Kyadondo East by-elections, Ssegirinya remained with honourable Kyagulanyi and they formed the People Power Movement together and now they have a party, named NUP.

Currently, Ssegirinya belongs to NUP Party. Ssegirinya says he has no problem with his political fathers Lord Mayor Lukwago and Dr Besigye. He departed from them during the Kyadondo East by-elections.

Muhammad Ssegirinya who grew up in Kyebando, Kawempe division attended Pimba Secondary School and then Datamine Technical Business School where he graduated with a Diploma in Journalism.

Muhammad Ssegirinya is a Muslim and a married man with children.