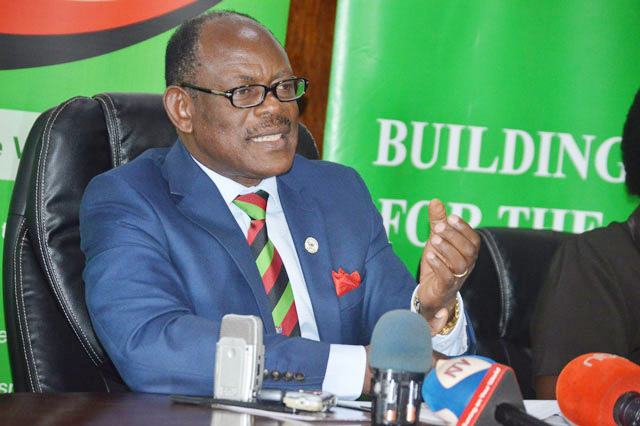 Prof Barnabas Nawangwe, the Makerere University Vice Chancellor has insulted the Education and Sports Committee of parliament after he was summoned on Tuesday together with the University Council to appear before the committee on Wednesday morning to explain Mak’s situation.

But Nawangwe instead wrote to Jocob Opolot, the committee chairperson asking him to extend the meeting until Thursday.

This propelled the chairperson of the Committee, Jacob Opolot to reschedule the meeting for Thursday the 14 of February 2019.

But the request instead generated anger amidst committee members forcing them to speak strangely.

“This thing has been running, and we wanted him. Because student’s right now they are not at school. Our voters have sold land, have sold animals for children to come to school and then children come and start loitering hear, is totally unacceptable. So, for me what I will propose I think we want to raise it such that he is brought. Police can pick him to come to the committee,” Hon Waluswaka MP Bunyole west County.

In a press briefing, Joseph Ssewungu the Kalungu County west legislator said that the committee is now considering issuing summons to police to get the VC, members of the Council to appear before the Committee.

“All the problems affecting Makerere are coming from them. We want them here to sort out matters of Makerere University. Already students were here in the morning, the associations are writing to us they want come, MUASA want to come to the committee to give their issues. Now Prof Nawangwe and this super lady they are not appearing. What we are going to do if they don’t appear tomorrow, we are going to use our powers get police bring them here either under arrest before the Committee.”

The Committee also received a petition from the student’s body also delivered a petition to parliament demanding for an immediate action on the current the crisis at the University.

Asking parliamentary Committee on Education and Sports to make lasting decisions on the matter.

“we have seen that the VC is put it out there that 85% of the University is functioning normally. But today we’ve come with other college presidents to show that the Colleges he claims that are actually studying are either having a splitting or sporadic lectures or are not having lectures.”

Today this is the fourth week of Makerere University staffs industrial action, demanding reinstatement of their Association chairperson MUASA Dr Deus Kamuyu and others who was illegally suspended out of the institution by Prof Barnabas Nawangwe.

The committee will again sit on Thursday to listen to the University Council.