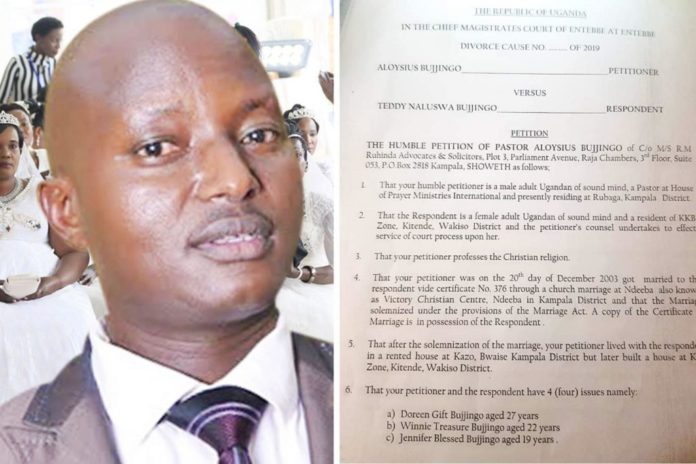 Buggingo says that he has made up his mind to dissolve their 29 years of marriage with Teddy Naluswa, because his “love and attraction “he had for her “has been swept away” arguing that they “cannot live together” any more.

He continued to state that the “cruel nature” and “incompatible impulsive conduct” of Naluswa, in their marriage has “irretrievably broken down.” Buggingo stated in a petition he filed before the Entebbe Chief Magistrate Court.

When court considers Pr. Buggingo’s petition, this means their marriage will be dissolved and he will be free to marry his fiancée he’s about to unveil as he said in a church service this week.

However, his pursuit for divorce has not been welcomed by some people with many condemning it including Pastor Jessica Kayanja of Lubaga Miracle Centre Church.

In her message, Mrs Kayanja launched a prayer session for Buggingo’s wife. She related Mrs Buggingo’s situation to the Biblical Esther “who prevailed and stayed in the palace of the king despite her many foes.

“May the seed that Mrs Teddy Buggingo has sown for 29 years in this marriage rise up and crush the head of the serpent,” Mrs Kayanja stated.

“I call upon every mother, married woman, child borne of a mother, everyone out there that upholds holy matrimony to join the Girl Power Team and I in prayer! The Hebrew woman will not leave her marriage. HANDASSAH MUST STAY!!!!”

Buggingo further affidavit continued to state that his marriage was filled up with mistreatment, embarrassment in the presence of church members, friends as well as their children.

He also said his wife Naluswa “exhibited cruelty, selfishness and ungrateful attitude” towards him despite his “loving and kind deeds, general disposition and words towards her.”

Buggingo says on August 10 2015 he received a wild response from Naluswa when he presented the church land purchase agreement to her. He says Naluswa threw the papers in his face in the presence of their children calling him a “mad man.”

He proceeded to say that early 2018 they held a family meeting in which Pastor Edward Kayizi acted as the mediator between the two but Naluswa “terribly abused” him shaming him in presence of everyone who was around.

Buggingo also accused his wife Naluswa of “being in constant communication with Buggingo’s known rivals (enemies of church) including featuring in various media interviews mainly New Vision, Bukedde, tarnishing his name, character and trying to fail the church.

He said his wife also sent him “abusive messages among which regretting the day she met him and always praying for divorce.”

Buggingo says their whole marriage life was full of wars but from 2015-2019 their marital woes escalated to the extent that he started receiving assassination threats from his wife, which made him vacate their Kitende house.

He says ever since he left his matrimonial home he has never returned for fear of his life. But he continued providing the family.

Buggingo accused Naluswa of publicising her marriage issues characterised with defamatory information intended to inflict his good name and character.

Additionally, he said that their marriage “which was brought forth with trust, love and care is irretrievably broken and cannot be salvaged.”

According to Buggingo, Naluswa’s behaviour is unbearable “in private and in public is intolerable given his position and standing as a Pastor.” And all attempts to reconcile them through counselling fell on a dry ground.

Buggingo adds that his daughter Doreen Gift Buggingo has followed her mother’s footsteps “now copied the abusive character and style of her mother despite the strong Christian background and training.”

Under her mother’s guidance and encouragement, Doreen Buggingo defamed him in all media platforms.

She “uttered defamatory words meant to embarrass and undermine him as proved in newsprints and Facebook.”

Pastor Buggingo’s lawyers state that Naluswa’s “cruel conduct” towards her husband was “intentional, malicious and intended to inflict mental suffering to him.”