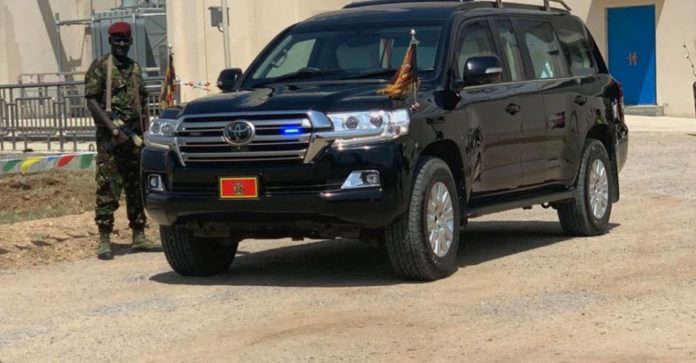 President Yoweri Kaguta Museveni’s stolen vehicle recovered in Kenya and brought back to him. Seven months back, Museveni’s Toyota Kluger car was stolen and sneaked into Kenya.

It was stolen in November 2018 from a fleet of his cars. It was then reported that the car had entered Kenya, from there president Museveni made a phone call directly to president Uhuru Kenyatta of Kenya to have his car recovered.

Kenyatta directed the Kenyan flying squad to make sure they find Museveni’s car. However, in April the car was traced and finally found in Gilgil.

It’s said that after the suspects learnt that they are being followed, they jumped out of the car and ran to the nearby bush leaving the car at the weigh bridge.

At the time of recovery, the car had South Sudanese Number plates; SSD 598M. after it was taken to the Nairobi flying squad offices.

After the chassis numbers verification was completed, a senior flying squad officer yesterday handed over the car to Museveni’s team.

Don Wanyama, Presidential Press Secretary via his WhatsApp status shared pictures believed to be of the suspected stolen car. Wanyama first thanked Njoroge before running one of the pictures.

“Our machine is back, it has been a long chase, 8 months to be exact,” Wanyama said.

Kenya and Uganda are joining hands in search of a lost presidential car for the second time. First time was in September 2014, when Uganda police assisted Kenya to recover President Uhuru’s Kenyatta’s stolen BMW car.

It was noted that the suspects impaired the car and detached the tracking system, but police had to get in touch with one of their girlfriends followed them and got arrested in Wandegeya a Kampala suburb.