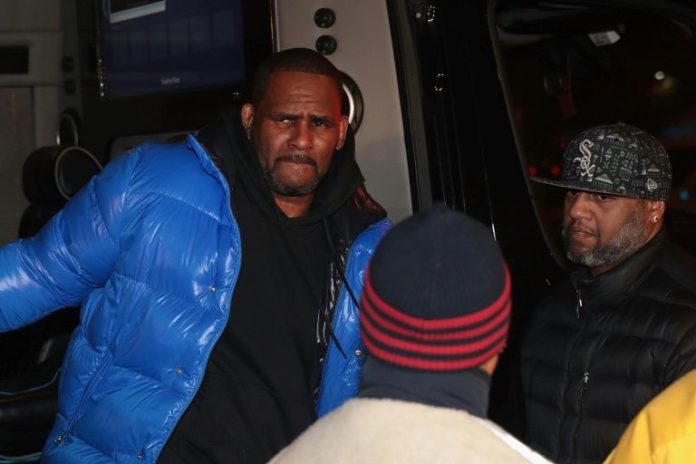 R&B superstar R Kelly has been charged with $1 million court bail by the US Judge earlier on Saturday after a graphic detailed footage was displayed featuring his long history of sexual misconduct involving four victims, three of them minors.

R Kelly, popularly known for his music like “I believe I can fly,” on Friday surrendered himself to police and charged with 10 counts of aggravated criminal sexual abuse against the four females, including a young girl of 14 years at the time of the alleged crimes.

Prosecutors described a video showing R Kelly repeatedly having sex with the 14-year-old, DNA evidence from another victim’s shirt that they said matched Kelly’s and semen from a second victim that preliminary tests showed appeared to be his.

Kimberly Foxx, a Prosecutor clearly stated that a witness who preferred anonymity issued a video showing Kelly repeatedly having oral and virginal sex with a fourteen -year -old girl.

He also said “in the video”, the victim repeatedly, repeatedly, says she is 14 years old. Adding that R Kelly also allegedly abused another victim whom he met at her 16th birthday.

Foxx says, Kelly clearly knew the girl was under age but continued to conduct sexual activities with her several times and afterwards gave her an envelope containing “a large amount of money”.

Illinois outlaws sex for persons below 17 when the partner is at least five years older.

Today the R&B star is 52, estimated to be 31 when the first alleged cases were filed.

Foxx said, in yet another case, Kelly made an appointment with a 24-year-old hairdresser to braid his hair and waited alone in a room for him to come. So, when Kelly finally entered, he removed his pants and tried to force the girl’s head down to his private parts.

In Foxx’s narration, the girl resisted but Kelly “ejaculated onto the victim and spit in her face several times.”

And he will return to court on march 8, when he’s expected to file a plea.

The swift turn of events followed a docuseries watched that renewed attention to decades of accusations indicating the US Singer engaging in having sex with under age sex, child pornography and sexual battery.

In a press briefing, the state’s Attorney general for Cook County Chicago, Mr Foxx said Kelly committed the alleged crimes between 1998 and 2010. And carries three to seven years of jail for each count.

Steve Greenberg, Kelly’s lawyer said that the charges placed on his client were based on old and false allegations.

“I think all of the women are lying, everybody’s trying to profit off of R Kelly.”

Today is the second time Kelly is charged with a sex crime by Chicago prosecutors.

First in 2008 and he was acquitted of 21 counts of child pornography after a dramatic trial. And one of the current charges involved a victim implicated in that law suit.

Avenatti says his office had uncovered previously unreleased footage of Kelly’s engagement in sexual activity with a teenager to the Cook County State’s Attorney and handed in.

He further said the 40 minutes’ tape, shot in the late 1990s, “leaves no question” of Kelly’s guilt, because the victim and the Singer in the video repeatedly referred to her age as 14, and the girl referring to him as “daddy” repeatedly.

Kelly infamously is known for marrying his protégé Aaliyah in 1994, when the late R&B star was 15, and he was 27, when he had produced the teenage musician debut album,

“Age Ain’t Nothing but a number.”

But later their marriage was nullified and in 2001, Aaliyah died in a plane crash.

The explosive docuseries named “surviving R Kelly” that was released last month freshly caused allegations against the R&B superstar to the fore.

And despite the inconveniences, Kelly maintained a huge fan base, performed and won awards since the year of his first accusation.