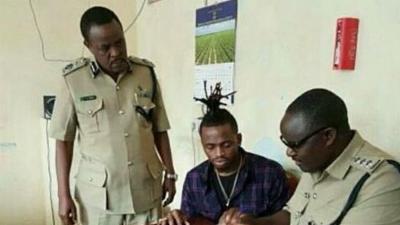 Dr Mwakyembe also added that the Number one singer will soon be arraigned in court to face charges registered about him by the central Government. In attempt to curb down pornography and explicit content, President John Pombe Magufuli has tightened the laws governing pornographic materials and he officially ordered banning of several songs with pornographic materials in Tanzania and arrest anyone involved. The minister also went ahead and warned all Tanzanian singers who are interested in releasing songs with explicit materials that they will immediately be arrested and detained in Jail.

It’s not yet clear what will happen to Diamond Platinumz who actually leaked his own video with Mobetto whom he claimed that they had no item after the baby he fathered with Mobetto. Diamond secret relationship with Hamisa cost him his official Girlfriend and popular socialite Zari Tlale Hassan whom they have two kids together.

It should be recalled that Zari and Diamond Platinumz called off their relationship over cheating allegations. Zari accused the Marry you singer of cheating on him with several other babes both Tanzanians and others he finds in bars and clubs.

In Ugandan news, Platinumz is well known for his relationship with Zari and several songs like Hallelujah ft Morgan Heritage, Number one, Bado, Utanipenda among several other songs.