Esteemed HiPipo Music Awards 2020 is organized annually by HiPipo (U) Limited to promote, recognize and celebrate music excellence in across Africa. These awards are the spirit that binds our music, art and culture.

The event is an initiative of HiPipo following it’s founding in 2006/7 as a digital, music/content and events company in Uganda.

The nominees of the 9th HiPipo Music Awards 2020 were revealed following a two months’ nominations submission and clean-up process with the music stakeholders mainly coming from Uganda, East Africa and the rest of Africa took part in this exercise.

During the announcement of the nominees by Innocent Kawooya, the CEO of HiPipo noted that following the completion of the laborious nomination process, it is now time for music fans from wherever they are to cast their votes for their favourite acts and artists via social media and the awards website until 14th March 2020.

“Our music industry is vigorous since the shortlisted are acts and artists befitting of a nomination. With that befitting implies to those that meet the HiPipo Music Awards nomination criteria which is available for everyone via the project website.in this case, nominees appear,

On Saturday, 14th March 2020 is when the HiPipo and its partners will present the prominent 9th HiPipo Music Awards live from Victoria Hall of Kampala Serena Hotel and the gala night will be preceded by a special red-carpet event hosted by Dro Hyve and Abigael Gabriella.

Entrance to the mega event will be subjected to a 100K Ticket for the ordinary revellers and VIP Table at Shs3M. 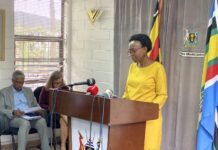 Coronavirus COVID-19: Uganda to test all people under institutional Quarantine