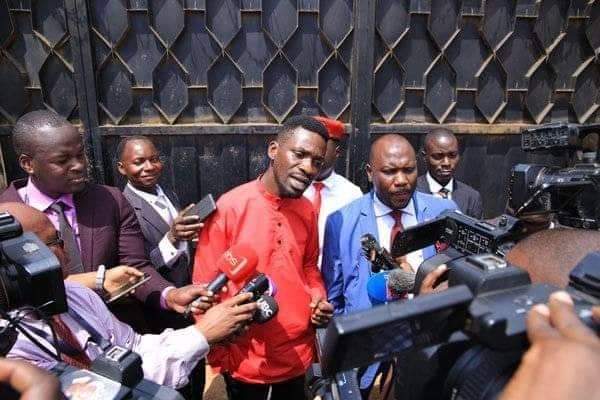 The MPs were denied access to the safe houses as they tried to embark on investigations about allegations of increased cases of torture and mistreatment of locals from these houses.

In particular, MPs were locked out of the gate as they tried to access two of the houses, both in Kyengera and Nalukolongo respectively.

“As a committee decision, we wanted to find out where these safe houses are and whether people are tortured there,” indicated the Buvuma Woman member of Parliament Nantume Egunyu before adding that they wanted to do it secretly without informing the police and public.

Hon Nantume however, confirmed that they visited three places but were only allowed to access and enter inside one safe house.

“We have visited three places but for the two places, it’s absurd we weren’t allowed to access by the soldiers we found. I can’t say we have seen people being tortured because we were denied entrance.”

Robert Kyagulanyi Ssentamu, the Kyadondo East Member of Parliament who was also part of a group of legislators said that he interacted with various people around the area and was informed that many locals are inflicted with different kinds of pain and torture.

“We saw some Somali women in Kyengera and we were told they are being raped,” Hon Kyagulanyi stated before adding,

“We proceeded to Nateete and saw another safe house by the roadside but we were denied access by the soldiers we found. This was an opportunity for the nation to see the impunity in the safe houses.”

This follows after allegations of increased arrests and torture of locals from various safe houses countrywide.

Different stories and reports from tortured victims have also persistently come up.

They were reported to have been mistreated from unrecognised places in the country until it was recently revealed by some wounded victims that cases of tortured usually happen in Lwamayuba Safe House, Kalangala districts and Safe Houses in Kyengera along Masaka road.

However, following these allegations, different legislators requested the government to allow them to visit these areas and carry out investigations but their request was denied.

The Minister of Security Gen Elly Tumwine refuted their request indicating that MPs were not allowed near those areas as they are places accessed only by the security.